More Than One Way to Skin a Cat

I know what you're thinking: "DeKay hasn't posted in a while.  Maybe he's dead?"  Fear not.  For while the frequency of my posting has dropped, I remain very much alive.  I've just been a little busy at work.

Thankfully the holiday season rolled around and I was able to take a couple weeks off. I took that time to relax and catch up on all the things normal people like to do: enjoy some good food, visit with friends, and hack on microcontrollers with integrated RF transceivers. 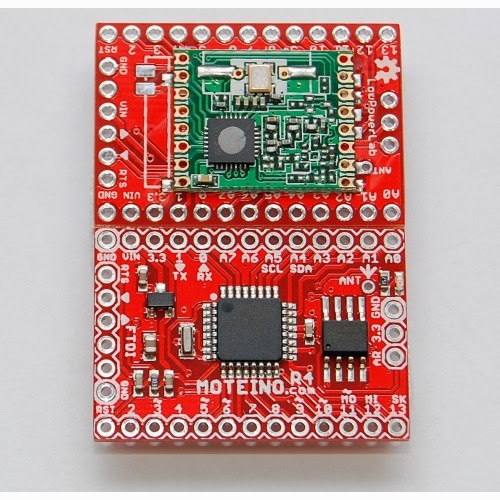 This bad boy is the Moteino from LowPowerLab. It is an Arduino clone with a 3.3V Atmega 328p that integrates a HopeRF RFM69 RF module. And let me tell you, this little module rocks. They are small, cheap, and readily available. Felix from LowPowerLab is getting tons of range out of the high power variant of these little guys.  They are easily programmed over a SPI bus so you don't need special hardware like you do with TI's CC1110, and cheap versions operating in the 900 MHz band are easy to get unlike TI's CC1101.  And recently, interoperability with the RFM12B popularized by the JeeNode has been achieved.

Now the RFM12B deserves a bit of discussion.  Like the RFM69 module, it is small, cheap, and easily programmed.  But it sucks in a number of ways.
A small FIFO means that you better have something real time or close to real time listening to the module. Otherwise its buffer overflows and you lose data. Something like an Arduino works well because it isn't doing other stuff like running an operating system. But worse than this is the hardcoded sync bytes. This pretty much limits the RFM12B to talk to other RFM12B's. And that ain't cool.

The RFM69 fixes all these problems and adds some nice features while it is at it:
In other words, it looks like it can do what other transceiver modules can do and more.

Devoted readers of this blog will know that I am strangely compulsed to receive wireless transmissions from my Davis weather station using all kinds of strange hardware platforms.  So why stop now?  I've been looking for a platform like this that is available and easy to use so that more people can take a crack with this stuff (it isn't like you can walk into a Toys-R-Us and pick up an IM-ME anymore).  I also don't want to be glued to the Arduino for everything.  While it is great for running as a remote node, I like the idea of something like my BeagleBone Black connected directly to a transceiver module running some home monitoring and control software (HouseMon?) with Internet connectivity.

But, baby steps.  What I decided to start with was my RFM69 equipped Moteino and the LowPowerLab RFM69 Arduino library.  Because once you've got the wireless protocol figured out, hard hard can it be?  Turns out, harder than I thought.  But after slamming my head against a brick wall a time or two, I got this.
This is the data from my Davis weather station out in my yard and received on my RFM69-equipped Moteino.  The first field is the channel number, the data is the eight data bytes sent by the ISS on every transmission (see here for what those bytes mean), RSSI is the Received Signal Strength Indication, and the CRC is calculated from the first six bytes in the data packet. Every packet is sent with a CRC in the seventh and eigth bytes, so those two values will agree with the calculated CRC if the packet is good.  I've got some problem somewhere where the first packet I receive is bad, as is any packet on Channel 42.  But those are details.  I'm off to a decent start here and I'm sure I can sort those issues out in time.

Want to check it out?  My DavisRFM69 library is on GitHub and the data above was collected using the ISSRx sketch in the Examples folder.  The approach that I've taken is to subclass my driver from the LowPowerLab one, overwriting just a couple of methods that are specific to this application (namely the initialization and the interrupt handler).  That reduces duplication and lets me automatically pick up any improvements Felix incorporates into his main library.  I have made a couple minor tweaks to his main library for some register definitions that I've issued a pull request for.  Hopefully these will be incorporated into his main library soon.  In the meantime, you'll want to use my fork of the library, so everything will compile cleanly.  This and more is all in the README.

This work can be taken a lot further:
Pull requests gladly accepted  :-)

I'm glad to now have this stuff under my belt.  I could have taken the entire break to just sit in front of the TV eating fruitcake.  That would be easy because My Lovely Wife makes a rocking fruitcake.  But what I really find satisfying is that sense of accomplishment when you set a challenge for yourself and make it happen.  This was a good way to kick off 2014, and the year is just getting started.