Dog Days of Summer No More

Back when my Lovely Wife and I first married, we bought ourselves a nice starter home in the city.  It was great, with friendly neighbors, a good sized yard, and lots of trees.  I love a nice tree.

The weeping birch tree in the front yard was one of the most spectacular in town.  The almost as tall tamarack tree in the front yard was very cool, as it is one of the very few pines that turns orange and loses all of its needles in the fall.  Sadly, both trees succumbed not long after we moved out: the weeping birch from bugs and the tamarack from lightning (!).
The backyard was nicely treed as well: several big spruce, a small oak, a nice birch, an apple tree, and a lovely Shubert chokecherry.  The latter had been pruned to grow as a tree with several main trunks that arched over your head as you walked under it.  Lovely.

There was also something about the neighborhood that I hadn't counted on: competition.  Many of the houses there had been built thirty years ago, and many of the original owners still lived there.  That meant a lot of these folks were coming up on or already retired and had a lot of time to put into their yards.  The neighbors on our one side were semi-retired and their yard was beautiful.  The neighbors on the other side were even worse: they were both young school teachers and had all summer off to work in their yards, and that they did.  The pressure to have a nice yard in the neighborhood was constant and intense.  I had to kick things up a notch if I were to hold my head up.

So I did.  I bought a really nice cedar gazebo kit and put it up underneath the chokecherry.  It was gorgeous, with its delicate railings and cedar shake roof.  It fit the setting perfectly, and the chokecherry looked like it had grown up around the gazebo.  It was beautiful and it bought me some good cred in the neighborhood but it wasn't enough.
So I built an enormous pond at the edge of one of the gazebo's edges, and made it as deep as city bylaws would allow.  I stocked it with goldfish and koi, and even built my own floating lights that were powered by the rest of the low voltage lights in the surrounding flower beds.  The fish were really cool, and would swim up to us looking for food whenever we walked by.
The pond became a veritable black hole of my time and energy.  Things would spin rapidly out of control.  I built a ridiculously long stream from the back edge of the yard that ended with a small waterfall at the pond.  This ridiculously long stream was made even more ridiculous long by meandering it along the way.  A 1200 gallon per hour pump provided water circulation.  The sound of babbling water that crept into our open bedroom window as we went to sleep every night was hypnotically comforting.
The stream cut the yard in half so that drove me to build a Pete's Pond Page bridge across it.  Its minimalist design was a perfect complement to the rest of the yard.
And then at the head end of the stream, I built something made to look a bit like a monstrous beaver dam / waterfall.  This was really big, but it was big for a reason: it hid my single stage Pete's Pond Page biofilter built from a 100 gallon stock watering tank.  Cotton batting served as a filter media and a small bag of barley straw in there prevented algae growth as if by magic.
We enjoyed this beautiful yard for several years before moving to another city in search of bigger and better things.  We sold the house to a nurse, and we were hopeful that she would keep the yard up.  What we would learn later was that she actually bought the place for her out-of-control son.  Her son and his friends then turned the basement into a crystal meth lab.  After several years of turning the neighborhood upside down, the bank foreclosed on them.  The chemicals from the drug making process seeped into the walls, and the entire lower half of the house had to be stripped down to the 2x4's and rebuilt before the house could be put back on the market.

Something tells me the drug dealers didn't much worry about cleaning the pond filter on a regular basis.  We moved back into the area a few years later, and I could not bear to drive by the place for many years after, fearing that all the work I had put into the place would have been destroyed by a bunch of stupid dope fiends.  It broke my heart.

Fast forward to present day.  We have been on our acreage outside the city for ten years now.  Much of that time we had The World's Greatest Dog on patrol.  We are just past the one year anniversary of her passing, and our new dog Buddy is now keeping an eye on the place.  Now the thing about Buddy is that he doesn't much like the sun.  Black Siberian Husky crosses would much rather be running across the frozen tundra than soaking up the rays on a hot summer day.

The problem we have now is that we don't have much for mature trees in our yard, especially in the area where my lovely wife spends so much of her time in the summer - the garden.  No big trees, no shade where a dog can hang out to help beat the heat.  There had to be a better way.  There is.  I was taking a stroll through Costco the other day and came upon this bad boy.
The gears immediately started turning.  I would build Buddy a gazebo to call his own.

Careful inspection of the display unit built up at the store showed an impressive level of quality for the thing given its $100 price tag:
Construction began the next day.  Normally I don't have too much trouble with the "Put Screw A in Piece 1" type instructions, but I was was thrown off by a couple things.  There were two different types of "Piece 1" pieces for the left and right edges of each side.  And I apparently have just enough dyslexia going on that I kept getting confused as to which piece should be on which side.  Finally, I got the first few sides together and took stock of the situation.

It would not do.  I held a piece of plywood up to the roof line around 11am and saw that the shade cast by the wood fell about six feet back from where the bottom of the gazebo.  The sides were too high to cast enough useful shade over the course of the day.  The happy young children pictured on the box the gazebo came in are doomed to die from skin cancer for this reason.
Modifications would be in order.  It would be a tall order for someone with the woodworking skills of Homer Simpson, but I'd be damned if I was going to do a half-assed job of this.
It took plenty of cursing and more than a little swearing, but I shortened the supports by around 18".  This would give a gazebo three feet high at the roofline.  The pre-drilling and countersinking of the new screw holes that would attach the bottom boards was the second worst part of it.  The worst part was doing that twelve times for each of the support posts in the kit.  But once that was out of the way and a test fit against the end customer proved successful, things moved along quickly.

I got each of the sides built up and screwed a few of them together.  Everything seemed to be fitting together pretty well. 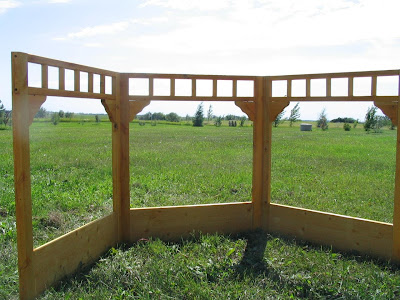 The six sides are together now.  The picture on the box also had six sides.  I appear to be on the right track. 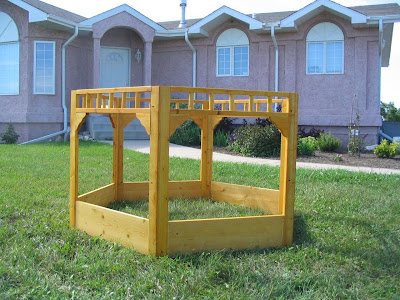 Here it is with the ledges attached on the bottom pieces and the roof supports up.  They are hard to see, but there are also chunks of wood angled at 120 degrees screwed across each of the corners.  This makes the whole structure surprisingly solid.  Note that I put something on top of the concrete in the driveway to prevent the wood from getting all scratched up. 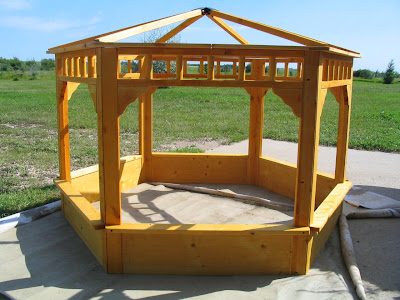 Like any good engineer would do, we had to do a final test for fit and finish.  The end customer seems to approve.  Note also how my Lovely Wife has to duck down now that I've chopped the roofline down to Buddy size. 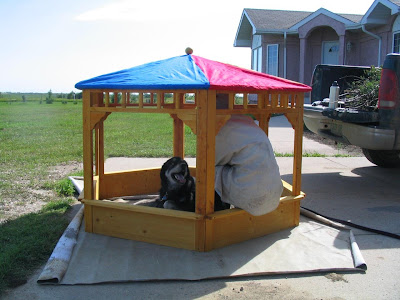 And here is the finished product in place.  We put it up on the north side of a small Scots Pine at the corner of our garden to help cast additional shade.  Note the enclosed pool that my Lovely Wife picked up early this summer at 50% off. 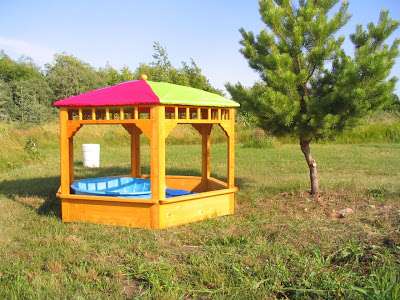 So the job is done so I know what you must be asking yourself.  Does he like it?  Well...
As I tell my friends, I like all the places I live to have a pond and gazebo.  Anything else would be uncivilized.
Posted by DeKay at 4:59 PM