It has been a little more than a month since we brought our new dog Buddy into our home.   And like anyone bringing a new puppy into their home, we've had quite a ride so far. 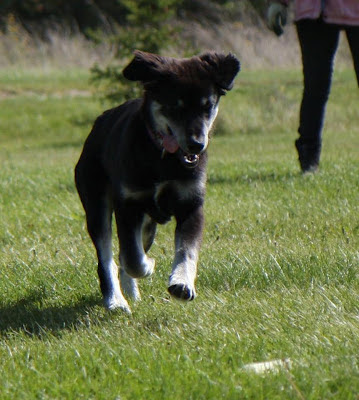 My favorite story about Buddy so far goes back to My Lovely Wife, who would always say to our first dog Abby: "Abby, where's your food?!?!".  Abby of course knew where her food was and would run to the small hall closet where it was kept.  There she would wait for My Lovely Wife to walk over to the closet and get her some food, or maybe even a treat.  Out of habit, My Lovely Wife asked Buddy: "Buddy, where's your food?!?!".  Buddy took one look at her and then ran to that small hall closet.  The door just happened to be ajar, so he pushed his nose in and opened it wide.  Then he grabbed the bag of food in his mouth and started dragging the bag along the floor to her.

My Lovely Wife watched this in utter amazement.  At this point we had had Buddy for only four days.  Four days at our place and he is retrieving bags of food.  We had made no attempt whatsoever to train him how to do this.  I was stunned when I heard the story, especially since he had been living chained up outside his whole life before coming to live with us.  It is a good thing that Buddy doesn't have opposable thumbs or I think we'd all be in serious trouble.
One thing about Buddy that we noticed right away was that he loves chasing after bugs.  Dragonflies are great.  Grasshoppers are awesome.  He'll be following along beside us and the next thing we know he is chasing down a bug and eating it up.  We both thought this was pretty entertaining for a couple of days.  That was until I realized that he probably ate bugs to survive at his previous home because he wasn't given enough food to eat.  "Don't worry, Buddy" I told him.  "There will always be lots of food here to eat."  But he still eats bugs anyway.

Speaking of eating, he does this.  A lot.  He is a growing pup, and he's got some lost time to make up for the insufficient amount of food he used to get.  Buddy is putting on over two pounds of solid weight a week.  It seems like every day he looks a little bigger.  Every day he takes up just a bit more space on the floor.  Every day, the old collar of Abby's that he wears seems to fit just a little bit tighter.  To quote the Simpsons - "A dog like that, you've got to feed every day."
He is coming along in so many ways.  He used to have very little confidence: the slightest touch and he would drop to his back with his paws in the air.  Now he'd sit there, get petted, and soak up the adoration.  His training is coming along nicely as long as there aren't a lot of bugs around.  And he is no longer deathly afraid of brooms; one day just after we got him, My Lovely Wife went to sweep the floor and Buddy instantly cowered in the corner.  Obviously, he was taught early on that a broom can be used for more than just cleaning the floor.  I'd like to teach his previous owners the same thing one of these days.

Oh, and I almost forgot to mention that he was house-broken almost immediately and was sleeping next to our bed after only three weeks.  And that he had free run of most of the house pretty much right off the bat, yet has not chewed any furniture or done any other damage (not counting one unfortunate Ethernet cable).  This despite the fact that he seems to have razor blades for teeth.
About the only thing dragging the little man down has been a bladder infection.  Symptoms of this showed up just a couple days after we got him, and my guess is it was somehow a complication from when he was neutered.  His condition improved almost immediately after being put on antibiotics for a two week run.  Unfortunately, the infection reappeared just a day after the meds finished up, so he went back on a different prescription for a couple weeks.  Those ran out just this past Thursday, and the symptoms reappeared the very next day.  We kind of saw this coming, so we were fortunate that the vet gave us meds for another five days to tide us over the long weekend we are enjoying now.  But we'll need to get Buddy in another appointment first thing next week to to see what the heck is going on there.

I'll tell ya though.  When that plumbing is working right, that dog can take one mean pee.  With Abby, I would count steamboats: "One steamboat, two steamboats...".  Abby would sometimes get to six and rarely to nine.  Buddy knocked out a 20 steamboat pee yesterday.  If I had to take a 20 steamboat pee, well... 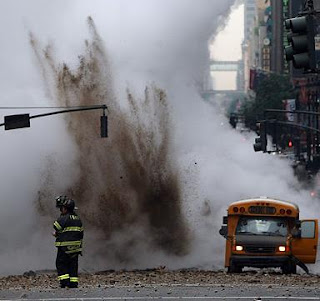 It is that camel-like ability that brings another of Buddy's oddities to light.  Every dog I've ever known LOVES to go outside.  Going outside IS THE BEST THING EVER.

Unless you are a dog named Buddy.  Buddy could usually give two shits as to whether he goes outside or not.  The other night we had to actually drag him and his sorry ass off his bed to get him outside to do his business.  And then when he got out there, he had a poo.  And then he had another.  I'll tell ya... if I had two poos in me, I'd be breaking down that damn door to get outside.

And every morning is the same thing.  My lovely wife gets up first and goes to the bathroom.  Then she heads for the door to take the dog out and I get up.  Buddy would much rather sit at the side of the bed and demand my attention while My Lovely Wife waits at the door for him to go outside.

One thing My Lovely Wife was really enjoying was Puppy Club ("The first rule of Puppy Club is that you don't talk about Puppy Club").  Puppy Club is put on by our vet every Thursday.  They give a little talk about some aspect of puppy rearing, and then the rest of the evening is a wild free-for-all where the puppies cut loose and spend the night smelling each other's assess.  What's not to like?

What's not to like is when you can't go anymore.  Last time My Lovely Wife was there, they pointed out that Buddy best-guessed birthday of April 1st makes him six months old now.  That means that Buddy is considered "graduated" from puppy club after only going three times.

This graduation is one of those little markers in the course of owning a dog.  One minute they are nothing but fur and energy, the next minute you are left wondering how so many wonderful years went by so quickly.  Matthew Inman (perhaps the greatest cartoonist of our time) put it this way in this snippet from his incredible comic about dogs.  Click that link - you have to read the whole thing. 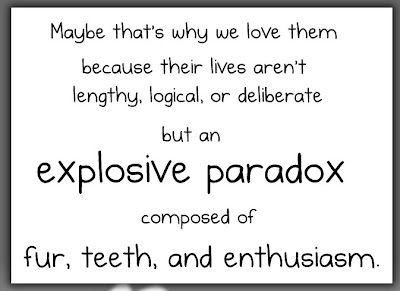 Buddy isn't quite the dog we expected him to be, but I think he'll be the dog we need.
Posted by DeKay at 8:00 AM