You Don't Find The Dog, The Dog Finds You

Followers of my blog will know that we lost our faithful dog, Abby, in early August.  In my last post I talked a bit about our progress in finding another dog to fill the void she left behind, and how the search wasn't going that well.  I left you with this.


The search continues.  We have actually come close once or twice, but no cigar.  We'll have to be patient and wait until the dog that is right for us comes along.  Or, as the fellow we bought Abby from told us: "You don't find the dog.  The dog finds you."

As we searched, we focused on getting a rescue.  We liked the idea of giving a good dog a second chance, and we weren't hung up on the whole purebread thing.
As I mentioned above, we had a few near misses.  We fell in love with one dog at the local SPCA, only to find out that she had already been adopted out earlier that afternoon.  Strike One.  Later that week, My Lovely Wife dropped by the SPCA one afternoon and saw another great puppy dog with loads of energy that she was very excited about.  It was gone by the time I got there after work.  Strike Two.  Things were not going our way.

We spent a lot of time on Petfinder, a website that collects listings from rescued animals across North America.  They make it easy to find dogs and other pets up for adoption in your area, and it also lets you filter by criteria such as size (I always checked off "Large" and "Extra Large").  Since we weren't having much luck, we started to expand our search a little to dogs we considered as "maybes".  "Nothing ventured, nothing gained", I would say to My Lovely Wife.  Many of the descriptions on Petfinder were pretty terse, and it was very possible that a real gem of a dog could be hidden by a lousy description.

That led us to head out one Friday evening to look at "Sunny", who was being fostered at an acreage not too far from where we live.  Sunny was a good looking dog, make no mistake, but she just didn't have that spark we were looking for that made Abby the incredible dog that she was.  "Sunny" was also more submissive than we'd like and it didn't look like she would grow to the size we were looking for.  At least we tried.

While we chatted with The Nice Lady fostering Sunny, we learned that she was fostering something like 15 other dogs with a comparable number that she called her own.  Many of these were dogs with various difficulties that weren't really adoptable.  The Nice Lady is a real gem, not one of those crazy old ladies you think of that has a house with 100 cats in it.  These dogs lived out on her acreage, had a great big area to run around in, a pond in which to cool off, and lots of trees to grab some shade in.  All the dogs looked happy and healthy.

As we talked, The Nice Lady's husband tried to join us in the backyard with yet another dog trying to break by him and join us.  "Don't let him out", she yelled to him.  "We have enough dogs out here."

The Nice Man tried to push this one energetic puppy back in to the house, but seemed to be fighting a losing battle.  This puppy was strong and would not be denied.  The Nice Lady turned to us and said "That's Buddy.  He's going to be a monster when he grows up."

My Lovely Wife and I looked at each other.  "Could we see Buddy?"

Release The Hound!  The Nice Man let Buddy out and he immediately started running around all over the place.  He seemed to take an immediate liking to My Lovely Wife.  It was apparent that this was one solid puppy dog.
We peppered The Nice Lady with questions about Buddy but she didn't know that much about him yet: the little guy had shown up at her place only the day before.  He wasn't up for adoption yet and so was not yet on Petfinder.  Nobody outside The Nice Lady knew about him yet.  We had tripped over Buddy by accident.

It turns out that this pup didn't have the easiest start in life.  It spent all day chained up in the owner's yard, and didn't get enough food to eat.  But it just so happened that Buddy lived only three doors down from the President of the animal rescue that The Nice Lady was a part of.  She had seen the treatment that Buddy was getting and finally convinced the owner to give him up.  Buddy had caught a break.

The Nice Lady was wonderfully forthright with her concerns about Buddy.  Spending so much of his early life chained up could have affected both his physical and mental development.  She was concerned that his hips hadn't developed properly because of the sway in his arse when he ran.  She also stated that she didn't think he wouldn't grow up to be "a rocket scientist".
However, "there was something about Buddy".  This was a phrase My Lovely Wife and I would use over and over again in our discussions later.  In our long drive home from the home of The Nice Lady, we didn't talk about Sunny at all.  It was all about Buddy, and how something seemed to click.  I wondered aloud if our dog had found us, rather than us finding our dog.

My Lovely Wife phoned The Nice Lady the next morning (Saturday) to express our interest in Buddy.  Unfortunately, she got the message over the phone that perhaps Buddy might not be the dog for us.  Dogs rescued from the area he was in get off to a tough start, and that can mean that the adopter might not appreciate what they could be getting in to.  Could he have some brain damage or other development disabilities that weren't apparent yet?  She had only had him for a few days and couldn't say for sure, but her first impressions suggested that Buddy could have some challenges ahead of him that we weren't really prepared to take on.  Strike Three.

This really put a damper on our spirits.  It was back to Petfinder but it was without a lot of enthusiasm.  We had considered and looked at a lot of dogs by now, and each time we found one that looked like the one for us, it went for naught.  The search was starting to feel hopeless.  I felt pretty down over the next couple of days.

Monday evening I convinced my wife to phone Buddy's foster mom back to touch base.  Maybe we had gotten the wrong impression?  I'm glad she made that call.  The Nice Lady had nothing but good things to say after getting to know Buddy for just a couple more days.  For one thing, Buddy escaped from the kennel the night we saw him while fifteen other dogs watched.  They found him the next morning curled up on their porch.  They then had to put him back in the kennel to watch him break out again so they could figure out how he was doing it.  Smart?  Check.

Buddy also jumped up behind her one day, knocked her over, and kept right on going.  Strong?  Enthusiastic?  Check.

Buddy was learning fast and doing well.  We were excited by this good news and wanted to take the next step.  In this case, it would be a home visit.  This rescue does its homework and makes sure that every dog they adopt out goes to a home that is safe and will take good care of them.  Our home visit turned out to be the very next day!  It must have gone well, because The Nice Lady asked us then and there if we'd like to write up the papers and put down a deposit.  Yes.  Yes we would.

There was just one more obstacle that Buddy had to get over.  He had a vet appointment scheduled the following week where he would get checked out and get neutered.  That was a long week to wait through.  We were worried that the vet would find problems with Buddy because of the early challenges he faced.  But there were no such problems: his heart was strong, his lungs were clear, and his hips were solid.  He was given a perfect bill of health, minus testicles.

Fast forward to this past Friday evening...
Our home is complete once again.  We know that Buddy will never replace Abby in our hearts.  Not possible, and not expected from him.  What he will do is make a place of his own in there, and for that there is plenty of room.  We look forward to many laughs and many adventures together in the years ahead.  I'll be sure to share a few of them along the way. 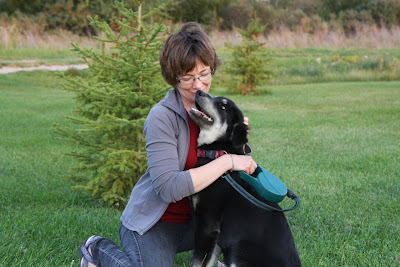