Time To Make The Doughnuts

Growing up, My Wonderful Mom would make doughnuts.  I don't mean doughnuts.  I mean doughnuts.  These deep fried delicacies were the stuff of legend amongst friends and family.  Quoting from a recent exchange on the Social Media site that everybody loves to hate:
Efforts by said family to get her to come out of retirement were not successful:
But I am one not easily dissuaded.  She was coming to visit for a weekend, and I would not be denied.  Through a clever combination of begging and pleading, I was successful in getting her to agree that Doughnuts. Would. Be. Made.  It was like a dream come true. 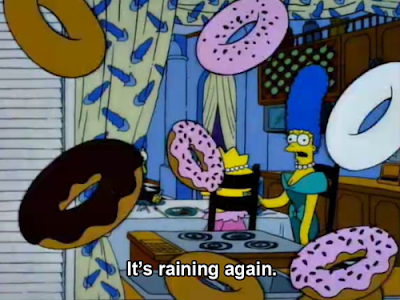 What follows is part recipe, part adventure.  You see, My Wonderful Mom isn't too hung up on that whole recipe thing.  Her original recipe called for "flour", but with no indication as to how much.
Maybe if you've made them a couple hundred times before, "flour" is sufficient.  But if you are a doughnut newbie like me, you're screwed.  So she basically went by a few scribbles for a recipe and followed her nose while I frantically made notes, weighed bags of flour before and after, etc.  My Lovely Wife served as Official Photographer.

In the thousands of words that follow, you are going to see strange things like "199 grams of Apple Sauce", but I'm just recording what it was.  I haven't made any effort here to round things up or down to make even numbers anywhere, but you should feel free to do so.  You're also going to see a lot of steps, but I've broken this down into excruciating detail so you aren't left guessing.  And the work of the Official Photographer makes things that much easier.

This recipe makes a hell of a lot of stuff.  And by a hell of a lot of stuff, I mean:
We used almost a full five pound bag of flour that afternoon.  You might want to consider cutting the recipe in half or something like that if you want to make some of one thing but not another.  Or don't and make the whole damn batch.  Live large, and have fun.

Now if we're going to make some doughnuts, we're going to knead a dough (Get it?  "knead" ... "dough".  Ahem, that's OK.  I'll see myself out).  Making this dough is a three part process: getting the yeast going, mixing some eggs and sugar together, and then getting all of that into the main dough mixture.  Ready?  Set!  Go!!! 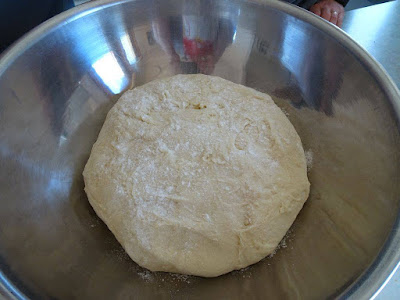 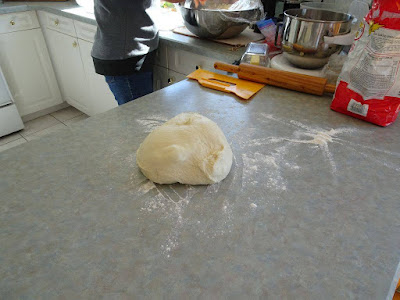 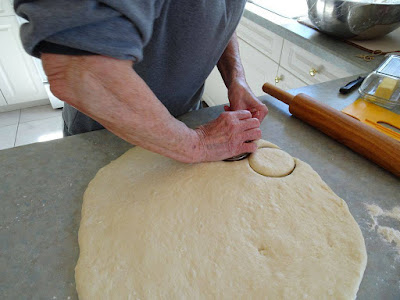 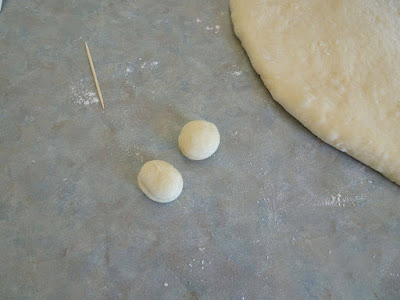 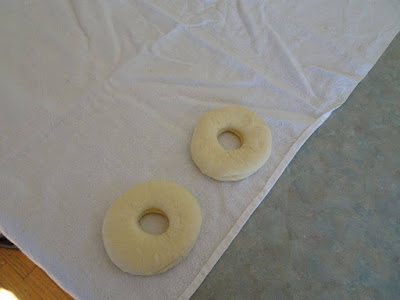 The end result of the two doughnut batches we cut up looked a little something like this.
While the doughnuts rose, we got the cinnamon buns and the Kolache ready.

Everybody knows what cinnamon buns are, and everybody has their cinnamon bun ideal.  To many, this ideal is a cinnamon bun dripping in brown sugar and topped with a heavy layer of cream cheese icing.  These people are wrong.  More is not always better.  More is sometimes just more.

This is a cinnamon bun that harkens back to a simpler time.  It is not horrifically sweet, and you won't need an insulin shot immediately after consumption.  It is a simple recipe where each element gets a chance to shine.  Try it.  You'll like it. 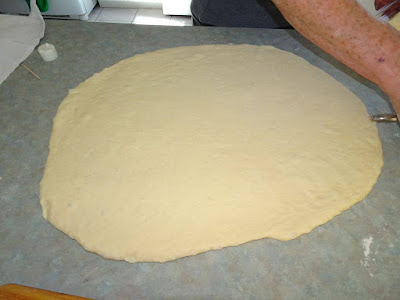 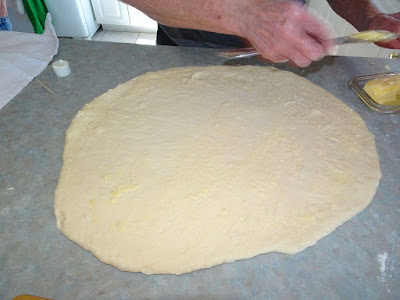 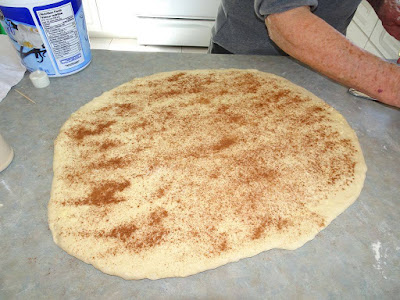 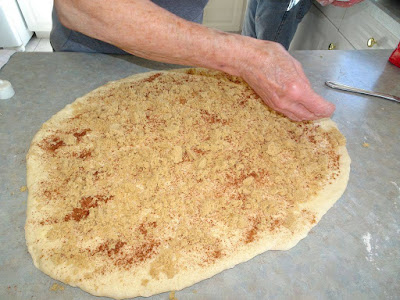 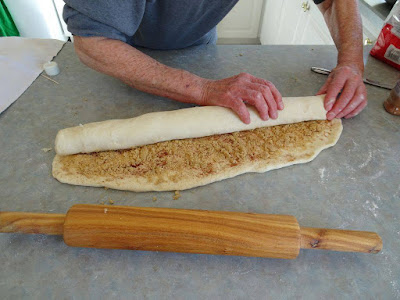 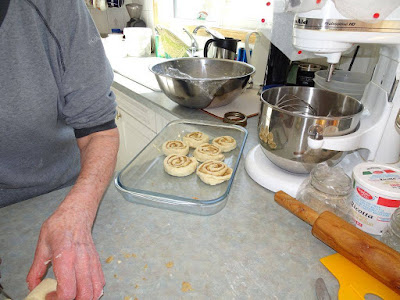 Everybody has heard of Doughnuts.  Everybody has heard of Cinnamon Buns.  Almost nobody has ever heard of Kolache unless you had an awesome Czech Grandmother like I did.  My Grandma always had Kolache at her house.  Always.  And they were fantastic.  And you never ate just one, no matter how much lunch you'd had.  Never.  Because if all you ate was one, her face would grow sad and she'd say...

And I guaran-damned-tee that you'd find room for another.
As I noted above and as shown in the picture, these are going to be made with applesauce and a crumb mixture made from butter, flour, and sugar.  Cottage cheese and raisins were another of Grandma's go-to's, as were some cooked up poppy seeds.  Me?  I always had this version.  Always.

Kolache can be made two ways: as a single serving size or kinda pizza size.  We're going pizza size here, because we've got a lot of other irons in the fire.  I'll have to go into Kolache more at some point, but that'll have to be another blog post.  In the meantime, do a little research if you're interested. 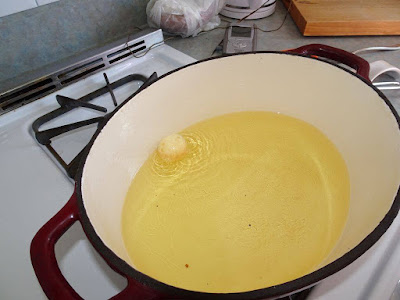 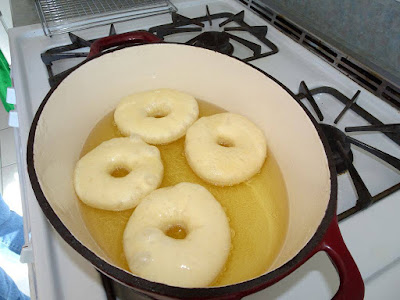 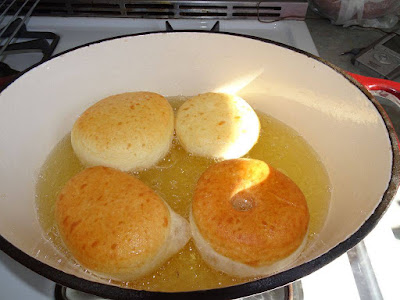 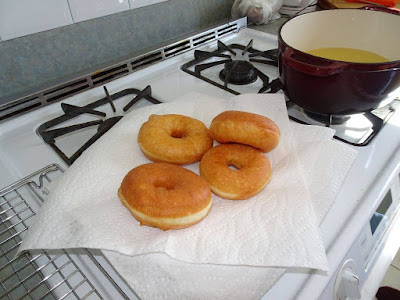 On the subject of topping the doughnuts...  Me, I like 'em just plain, so you are on your own if you want to add toppings to these deep-fried treasures. I'd think that sugar or sprinkles should go on while the doughnuts are still very hot. Bismarks should be filled with jelly or jam after they have cooled so the jam doesn't melt in and make the center of the Bismark all soggy. Topping with some kind of icing is probably best done once they have cooled as well.

Right after this baking extravaganza, it was time for supper.  We whipped up a delicious supper for My Wonderful Mom featuring Ricotta Gnocchi and Chicken Breast With Tomatoes and Capers.  Dessert was, of course, doughnuts.  I grabbed one off the counter and took a bite walking back to the table.  BOOM.  I was instantly transported back to my teenage years.  The doughnuts tasted exactly as I remembered them.  And in that second, all of that effort was worth it.

But you, dear reader, let's not forget about you.  All you have seen to this point are isolated pictures of this and that.  But I'm a big picture guy, so let's look at the big picture.  What came out of that afternoon?
One hell of a lot of awesomeness, that is what came out of that afternoon.  But there is more that is not shown here.  I had a great day with Mom.  And I mean, a great day.  She hadn't made these doughnuts for decades!  We had a lot of laughs and relived a lot of memories while recreating a classic memory from my youth.  If something terrible were to happen tomorrow, I'd look back fondly to this day and think that I made the most of it.  Even if I hadn't gotten to taste a single bite of any of what we'd made, it would have been worth every second spending that time with her.

I don't want to be that person that says "I only wish I had learned to make X from my Granda / Mom / Aunt.  It was so good, but I never got the recipe."  To Hell with that.  Don't be that person either.  Go see your Grandma / Mom / Aunt and tell them how much you enjoyed that whatever when you were a kid.  Then spend the day making it together, and have a blast while doing it.

Days after My Wonderful Mom left, I opened the cutlery drawer.
She'd deliberately left her Donut Holer behind, her way of passing the baton.  And here I sit with a freezer full of baked goods, and a lump in my throat.

Go cook something, go do it now, and go do it with someone you love.  And tell 'em the guy from Mad Scientist Labs sent you.