How To Make A Sandwich

The Lowly Sandwich. For too long, the Sandwich did not get the respect nor the attention it deserved. Then two things happened. First, "Sandwich" (and the closely related "Sammich") became a meme.  I really like this one, just because I think Steve Balmer is a doofus...
... but you gotta like this one too.  Because Nigella.
The second thing that happened was my writing of this blog post.  Srsly.

If your first thought of a Sammich is a slice of bologna with store-bought white sandwich bread, you’re doing it wrong. Very wrong.  I'm here to fix that.   It is time to dress The Lowly Sandwich up a bit and give it a chance to strut its stuff.
Now I’ll admit, I’ve long had pretty low Sammich expectations. I basically grew up on something much like the unadorned beast pictured above, taking a lunch to school for the majority of my school years in Grades 1 through 12. And in those days, lunch meant Sammiches.  Let’s just say I ate a lot of Sammiches over that time, and going back down that road didn’t initially hold a ton of appeal.

But appreciating and, even better, making your own good food means you’ve sometimes got to open your eyes and see a challenge in a whole new light. Sometimes, you’ve got to do that in territory that you might think has been well trodden. Can we turn the pedestrian Sammich into something that you dream about? Can a Sammich blow your mind?

The best way to answer this question is, of course, by example. I’m going to show you my take on a popular Sammich available in these parts: the Chicken, Brie, and Fig Sandwich from Earl’s Restaurant. Earl’s is a restaurant chain here in the Great White North that pairs a pretty decent menu with a pretty decent beer selection brewed on premises. What is not to like? Very little as it turns out. 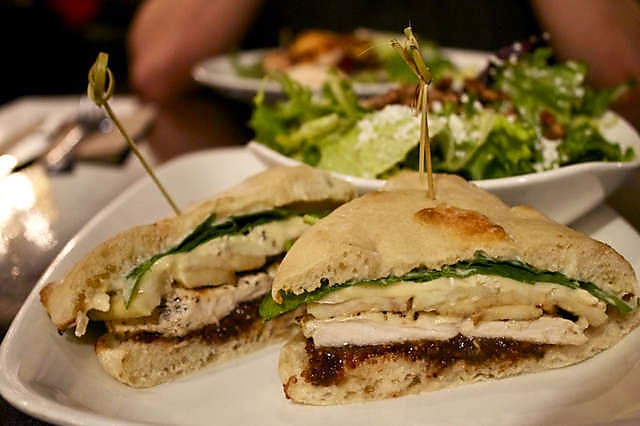 The menu states that the Chicken, Brie, and Fig Sammich includes  "roasted apples, spinach, garlic aioli, fresh ciabatta".  Hmmmm... Bread. Brie. Chicken Breast. These are not exotic ingredients. You might have these ingredients or reasonable facsimiles thereof sitting in your fridge right now. That was the case in my refrigerator when this idea came to me anyway. What I ended up doing was making the best with what I had on hand at the time to put together an Earl’s-like Sammich.  I subsequently devouring said result. How did I go about it? Let me show you.  Let me show you exactly - to the gram.  Because that's how I roll.

First off, you need some decent bread. Bread is the foundation of a good Sammich, and a crappy bread is a crappy foundation. I recommend something like my No Knead Blue Cheese and Toasted Sesame Seed Bread (Jim Lahey's No Knead Bread with 40g each of crumbled blue cheese and toasted sesame seeds) described by a friend as “The best bread I’ve ever had”. And his mom was a baker. If you think you don’t like blue cheese, you are wrong. Blue cheese is amazing. The amount of blue cheese in this recipe is just enough to haunt the bread with its flavour, not beat you over the head with it.

Cut yourself a couple slices but don’t go too thick here. The bread is the foundation of the Sammich, but there is little worse than a Sammich that just tastes like all bread. That isn’t a Sammich. That’s just bread with some stuff on it. The slices in the picture below could probably be a little thinner.
Next up, you’ll want to lay a little mayo down. This serves a couple purposes. First and foremost, it adds a nice tang to the sandwich. Second of all, it serves as a kind of waterproofing layer so that the next ingredient up won’t make the bread soggy. I’m using a low fat mayo hear and can hear the boos from the audience even in advance of posting this. Haters gotta hate. I went this route because a) it is what I had in the fridge and b) low fat for a non-critical element like this lets me eat more of other stuff. Life is full of decisions. Make yours. Put on what you like.
How about an option even at this early stage? Once in making this sandwich I made the “mistake” of putting on this ridiculously awesome concoction.
If you see this stuff in your grocery store, buy it on the spot. It. Is. Spectacular. And by Spectacular (capital S), I mean it will clear your sinuses in one hell of a hurry. This stuff lays the heat down far better than any “hot” horseradish I’ve ever bought in a grocery store. Store-bought horseradish is an abomination that should stay in the store. I am convinced that if you want good horseradish, you need to make it yourself. But that is a post for another time. Go easy on this stuff if you got it.  You have been warned.

Next up we add a bit of sweetness with a little applesauce. Again, I’ve had bad luck with store-bought. I have been disappointed time and again with anything out of a can. Want good applesauce? Buy a pressure-cooker and make your own. We make ours from crabapples given to us by our friends in the fall, after they have picked multiple five-gallon pails for themselves and can’t bear to look at a single apple more. The tang you get from these apples makes a delicious applesauce, so don’t go ruining it by adding sugar. Oh, and make pie. Not too heavy here. The applesauce, I mean. If you’re making pie, make it as heavy as you like.
The Earl’s menu says they use fig jam. Fig jam? I didn’t have no fig jam. What I did have was dates, to which My Lovely Wife has a habit nastier than anything cocaine or heroin could pull someone in to. I sliced a few dates as thin as I could and laid them down on top of the applesauce. This is easier said than done because dates are kinda mushy and very sticky, but I persevered Because Of Sammich.
Next up: chicken breast. Cut up chicken breast and put it on the Sammich. This part isn’t complicated. Just use small pieces or thin slices and everything will be fine, just fine. It wouldn’t hurt here to pop it into the microwave for a bit just to take the chill off.
Next up would be the Brie in the Chicken and Brie sandwich. But again, your options are open here. I think you want to stick to a softer cheese that will make the effort to get your attention, rather than a rather flavourless cheese that everybody goes with because they know it (mozzarella, I’m looking at you). I went with a garlic-flavoured Boursin cheese based on a tip from a buddy of mine. He was not wrong. But don’t get me wrong, Brie would have been good here too. I guess what I’m trying to say here is: get a damn tasty soft cheese and lay it down on the other piece of bread.  You probably want to use more than I did here.
That done, bring the two slices of bread together. You are so close now, you should be able to taste it. Patience. There is one more step to go.

What I’ve been doing up to now is tossing the entire sandwich into the microwave for a very short period of time. How short? I can’t remember to be honest, but I seem to remember it was in the twenty second ballpark. That is just long enough to take the cold out of the chicken breast and apple sauce, but not so long that the applesauce is steaming hot. The microwave also does a pretty great job of making bread that might not be at its freshest taste a lot better. I also like how the warming of the bread brings out the flavour of the Blue Cheese in my Blue Cheese and Toasted Sesame Seed Bread even more. 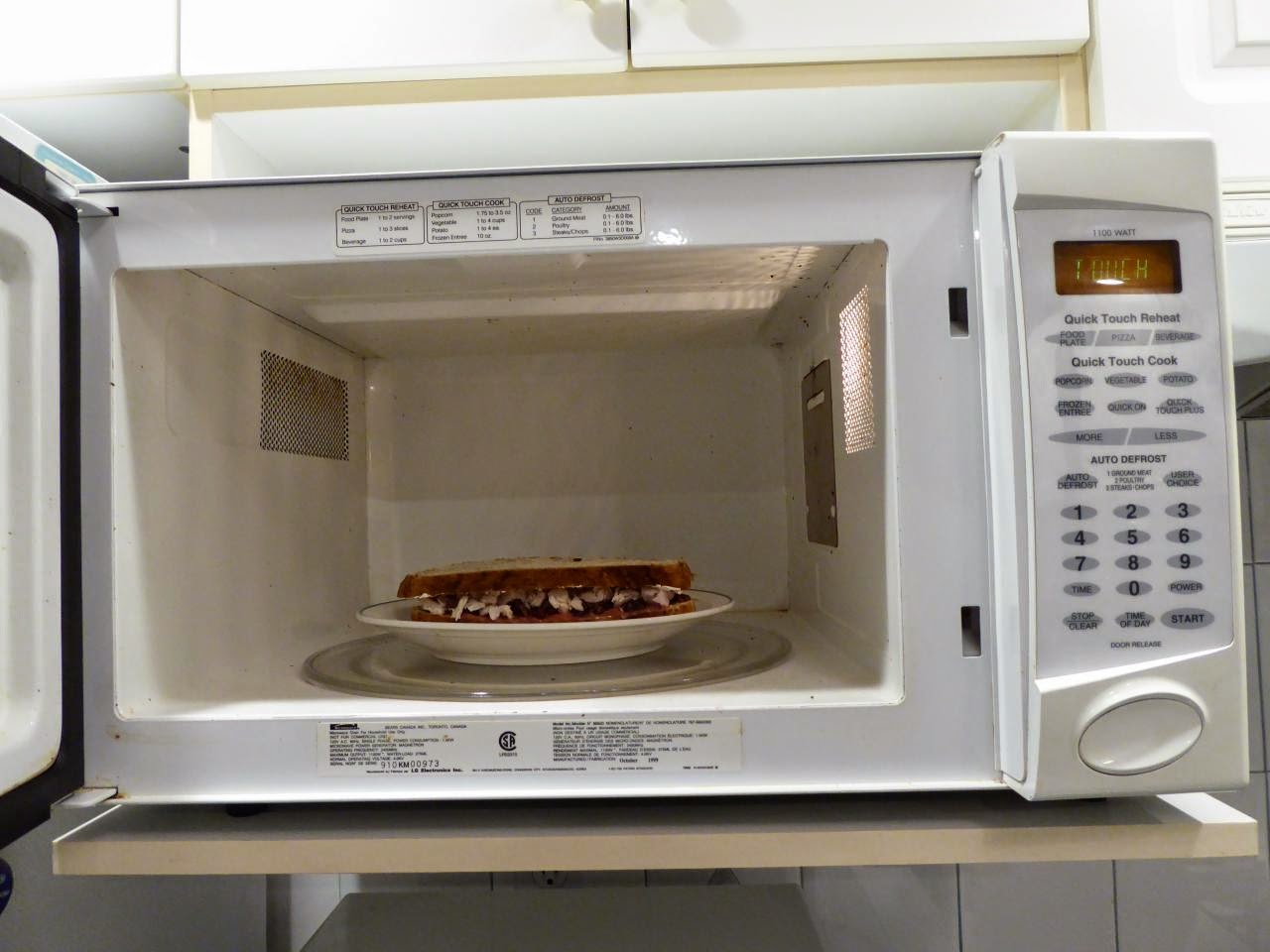 I present for your inspection below the end result, cut in half and ready to be devoured in no time flat. It is good. Damn good. Is it a dead-ringer for the Earl’s version? Not exactly, but I did take several liberties along the way.
As good as that sandwich was, one always needs to think ahead to Next Time.  Next time, I want to try something a little different. Something like this.
This is my waffle maker. There are many like it. This one is mine. Inspired by The Waffleizer’s book “Will It Waffle” (the answer is yes), I made up this Sammich over Christmas with my now famous Diablo Bread, some leftover turkey breast cooked sous vide (with these seasonings but this cooking method), mozzarella cheese, and thin slices of dill pickle. Were you to have actually tasted this yourself, you would have wept uncontrollably with joy. I can say without fear of exaggeration that this is the best Sammich that has ever been made or ever will be made.

It didn’t hurt that I brought a nice new technique to the party.  I was finding the lid of the waffle iron didn’t put enough weight on the Sammich to transfer the heat to it like I wanted. So I put my water bottle (about half full) onto the handle of the waffle iron, and I jammed a chopstick in there to prevent the bottle from rolling off. The beauty of this technique is that you can adjust the amount of “press” this ghetto Panini press puts on your Sammich by tweaking the amount of water in the bottle.
And why, you might ask, am I using a waffle iron instead of a Panini press to make this Sammich??? Jeez Louise. Really??? Can you make King Arthur Sourdough Waffles in a Panini press???  No. Can I make paninis in a waffle iron???  Yes. Are we done here???  Yes.

Based on the spectacularity of this Diablo Bread / Turkey Breast / Mozzarella Cheese / Dill Pickle Sammich, I can only imagine how mind blowing a waffled Blue Cheese and Toasted Sesame Seed No Knead Bread / Horseradish Mayo / Applesauce / Date / Chicken Breast Sammich would taste. But I have a pretty damn good guess. It would be definitive proof that there is a God and He loves me. I don’t know about the rest of you, but me for sure at least.