In the novel Flowers For Algernon by Daniel Keyes, a man named Charlie Gordon with an IQ of 68 is selected to have an operation to increase his intelligence following a similar surgery on a laboratory mouse.  The surgery works but the results turn out to be only temporary.  The story is told through the diary that Charlie keeps as his intelligence shoots up, only to later fade away. 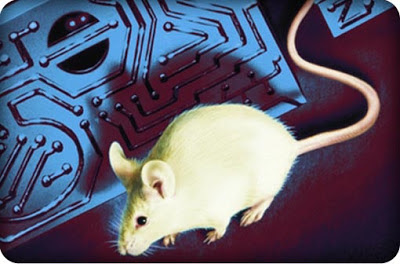 This was one of those books that I was assigned to read in grade school, and it is one of the few that really stuck with me.  It has played on my mind more and more in the last few years.  I am at the age where my mind and body are not quite where they used to be.  I have worn glasses since I was around 10 years old but recently had to go to progressive lenses.  I sometimes have trouble putting a sentence together because the words just don't come (oddly enough, this seems to be restricted to nouns: persons, places or things).  My memory is terrible.

I am stronger than I have ever been but I realize that that won't last forever.  At some point I will go from gaining strength, to maintaining it, and then to losing it.  Aches and pains now stick with me longer.  I think I might have a touch or arthritis in a joint or two.


“The path I choose through the maze makes me what I am. I am not only a thing, but also a way of being--one of many ways--and knowing the paths I have followed and the ones left to take will help me understand what I am becoming.”

The key in the quote above is "The path I choose...".  Every morning when you wake up gives you the opportunity to make a new and better choice.  I think I let a few too many years just kind of slide by.  A friend of mine likes to say that "Youth is wasted on the young."  Indeed.  But no more.


"I'm like a man who's been half-asleep all his life, trying to find out what he was like before he woke up."

I now regularly challenge myself both physically and mentally.  I want to use my time to reach my goals and get things done.  I love the internet for letting me expand my horizons into areas I never knew existed or thought I'd be able to do.  For example, I was never much of a cook but thanks to Sous Vide and a little motivation, I can whip up a pork tenderloin or turkey breast that is better than any restaurant in town.  And with a few simple techniques, I can serve that with a slice of bread so good it would make you cry...
Now more than ever, I feel at the top of my game.


“I'm living at a peak of clarity and beauty I never knew existed. Every part of me is attuned to the work. I soak it up into my pores during the day, and at night—in the moments before I pass off into sleep—ideas explode into my head like fireworks. There is no greater joy than the burst of solution to a problem. Incredible that anything could happen to take away this bubbling energy, the zest that fills everything I do. It's as if all the knowledge I've soaked in during the past months has coalesced and lifted me to a peak of light and understanding. This is beauty, love, and truth all rolled into one. This is joy.”

Accomplishment.  That is now where it is at for me.  I want to learn new things, make things work, and get things done.  My biggest problem now is finding the time for all of the things I want to do.  I have to force myself to focus instead of taking off on a dozen different tangents.  I realize that I'll never get good at anything new if I spread myself too thin.  I also have some upcoming obligations that will dig into that time even further.

In my last post, I reviewed the goals I set for myself in 2012.  I worked hard to try and hit those goals, and the ones I missed weren't for lack of effort.  The list itself was an excellent motivator.  Given that, it is time to set myself a new list for 2013.  Note first, however, that these are not resolutions along the lines of "I will quit smoking next week."  I wrote last year how resolutions of that type just show that you suck.  If there is something you want to do, and you can do it right now, then why aren't you doing it right now?

I set a stronger squat as one of my goals for 2012 and this is a very worthwhile goal to carry into 2013.  It lags well behind my deadlift that I am quite happy with.  The squat is one of those standard strength markers that people measure themselves by.  Like I realized last time, I must continue to build up my bottom position strength to achieve some decent gains here.  I'll carry over the same goal that I set for myself last year, which was...

I posted this video last year, and it is no less awesome this year.


I get mistaken for Tom Platz all the time

I'm happy with my Military Press but I have a fairly crappy Bench Press.  I'll continue to work on the latter, but really it is the lift I care the least about.  It can also be pretty tough on my shoulders, so I'd rather maintain good shoulder health instead of trying to wring a few extra pounds out on this one.

I mentioned last year that work isn't really something I talk about on this blog so I will continue not to do so for the most part.  However, it is worth mentioning that I am often called to put in substantial amounts of extra effort as required.  This leaves me with less time to play around with the stuff I talk about here.  Hopefully things won't be too crazy this year in that respect.

One of the things I wanted to get done last year was some basic home monitoring set up.  If I head off for a weekend in the wintertime, it would be nice to know that my furnace is still running without having the neighbor to check in on it daily.  I have myself a couple of JeeNodes that I have been playing around with but I haven't had enough time to really dig into them and get them talking back to, say, my router which could then push the data out to someplace like Cosm (nee Pachube).  So this goal remains the same as I set it last year...

For some time I have also been playing around with my Davis weather station.  I wrote a little while ago that Davis is actively working to close off this platform and prevent me from getting at my own data.  I wasn't very happy about this.  Their actions have made me even more determined to implement my own alternative receiver.  My current platform is a Pretty Pink Pager, and while the cool factor in this approach is off the charts, it isn't a solution that lends itself to widespread use by others.  I want to take an approach that is more accessible.

I'm mulling over a couple of different options for an alternative receiver.  Right now I'm liking PanStamps.  These are Arduinos with an on-board radio receiver chip compatible with that used in the Davis console.  They also seem to have a very nice low level library that would let me work with the radio chip at the level I need.  Another consideration is using a Ciseco Eve Alpha.  This has the benefit of being multi-radio capable but they aren't calling it "Alpha" for nothing.  Either way...

Goal #3: Reverse engineer the Davis frequency hopping algorithm and implement it on an independent platform.

Goal #4: Get a skeleton driver for the Davis console into MESS.  This one won't make much sense unless you've read my earlier post on the subject.

I consider #4 to be like a KickStarter-like "stretch" goal.  It would be great to get this done, but it will take a lot of work to make it happen.  The AVR emulator in MESS right now will need some enhancements to work with the specific chip used in the console, and I'll have to implement a sufficient level of functionality within the emulation to make it worthwhile submitting.  However, doing so would enable a lot of other people to dig into the console and figure out what makes it tick.  It would also be fun to be part of the MESS project itself.

That should do it in terms of goals but I won't be restricting myself to just those.  There are still a lot of other things I want to get done this year, such as
These things lead me to the same goal I set myself last year.  I met this goal, but it is a goal that can never be considered complete.

Goal #5: Keep this blog going, share the adventure, and enjoy the ride.


“Strange about learning; the farther I go the more I see that I never knew even existed. A short while ago I foolishly thought I could learn everything - all the knowledge in the world. Now I hope only to be able to know of its existence, and to understand one grain of it. Is there time?”