It Involves A System Of Pulleys

Engineering is not well understood by most mortals.  As a matter of fact, I gave a presentation at work last week to give others in our company a better idea of what we Engineers do in our department and how we see our role in the grand scheme of things.  This was Page 2.
(Note that "Engineer", "Engineers", and the profession of "Engineering" should always be capitalized, just for reasons of general awesomeness.)

I must confess that this public misunderstanding comes as close to home as my own Dear Sister.  When talking to her about something technical, I generally get asked: "Does it involve a system of pulleys?"  A fine inside joke indeed.  It also speaks to the fact that simple things can become deceptively complicated.  Case in point, and something I've wanted to blog about for some time now, is my rainwater collection system.

Water is a precious resource out here on the Ponderosa.  All we had when we moved in to the place was a well to supply our water, and not a very good well at that.  It wasn't very deep and recharged slowly.  It was enough for drinking, washing, etc. but didn't have a lot of margin for watering gardens and newly planted trees.  I figured one thing I could do was build a rainwater collection system.  As usual, no half-assedness would be tolerated.

I based the system around the idea of a dry stream bed.  Building this was a big job.  A very big job.
The previous owner had tried something on a smaller scale but it sucked.  It was just a rectangular-shaped pile of rocks down the slope to the back of our house.  Half the rocks were missing and it was a weed infested mess.  I cleared out all of the old stones and came up with a shape with a more natural flow to it.  I then laid down some heavy duty landscape fabric to keep the weeds down.  On top of that I laid down some 1" chicken wire to discourage any gophers that might want to dig a hole in the middle of it

It doesn't show well in these pictures, but there is a dry stream shape about a foot deep that winds its way through all of these rocks.  This dry stream is lined with a thick EPDM rubber normally used to line garden ponds.  The water I collect from my eaves-troughs drains into the top of the stream and winds its way down to the bottom.  The stream bed is actually functional when it rains. 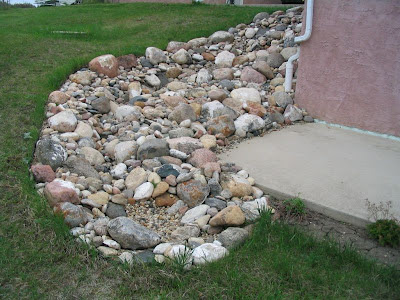 Laying all of the rocks was a huge job.  There must be thousands of rocks here of various shapes and sizes.  And many of these rocks are heavy, big-assed rocks.  It took me a couple of years to get this part done.  Every rock was put in place by hand, both to give the right mix of large and small, and also to make sure the entire surface was well covered so you couldn't see the landscape fabric or the liner below.  The fact that it is on quite a slope added to the challenge.  Want to get strong???  Move out into the country.

All the water I collect up top gets to the bottom.  Right about here.
This is where the "system of pulleys" come in.  Let's take away the gravel in the center of the picture above.
Here is where things get interesting.  Taking off the gravel shows a heavy grill meant to cover a fire pit.  It sits on top of a hard plastic sump basin that I got at Home Depot for $20.  It is just like the one shown in the left of the picture, only the one in the ground right now has a big crack in the bottom.  It didn't always have that crack, but it seems that water expands when it freezes.  The first one I used was left in place all winter to prevent the dirt around it from caving in.  It got some water in it which subsequently froze and blew the bottom out.  So the cracked one is used in winter to keep the shape of the dirt around the pit and the other one is used in summer to hold the water. 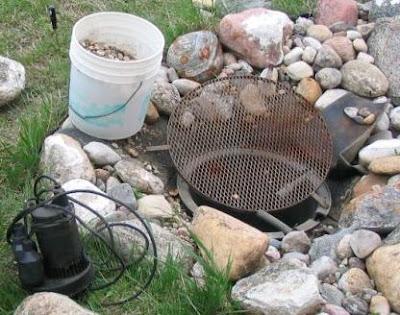 The above picture gives a closer look. You can see the heavy rubber liner used to carry the water down the stream peeled back.  The sump pump I use to pump the collected water back up to my holding tank is shown in the bottom left.  You can just barely see the check valve behind the float switch that prevents the water pumped up and out of the sump pit from flowing back down again.  You can also see a couple hoses poking into the sump pit.  The one at about 2 o'clock runs under the rubber liner and connects the sump pump to the holding tank above.  The other one around 5 o'clock brings in water from another downspout at the other end of the house.

Springtime means pulling the old sump pit, putting the new one in its place, connecting everything up, and making it all pretty again.  The dance goes a little something like this.

Step 1: Pull out the old sump basin.  The chicken wire and weed fabric are clearly visible.
Step 2: Put the good sump basin in place and connect the hose up.  I use some flat rocks to prevent the pump from moving around within the basin.  Otherwise, the float switch could get hung up and prevent the pump from turning on when the pit gets full of water (ask me how I know).  Tie-wraps are also used to keep the hose and the cords out of the way. 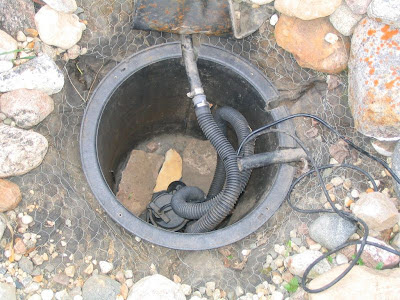 Step 3: Put the grill grate back over top of the sump basin, making sure the wires from the pump and float switch are brought out.  Lay the heavy rubber liner back down so the water carried down the stream will drain into the middle.  The picture below shows the setup back together, just needing the gravel to be put back on top of the grate. 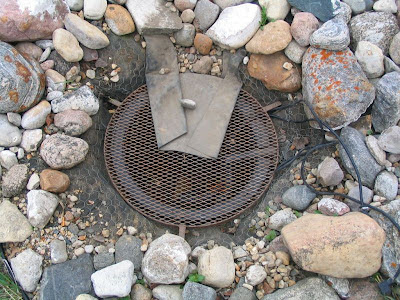 Step 4: Plug the float switch plug into the AC power cord and the pump into that.  I run the cord through Liquatite flexible conduit because a critter will gnaw through an exposed power cord if they get half a chance.  They'll generally just do it once, though... 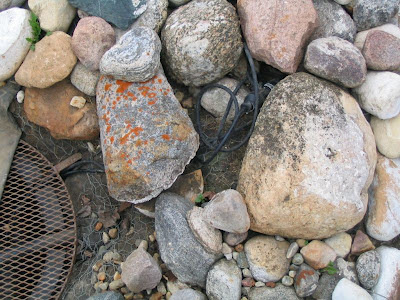 The top part of the design is a lot less complicated than the bottom.  Here is a picture of the front of the house in early spring where the downspouts are not connected in to the system of pulleys.  No point dumping a bunch of water in during spring thaw that could later freeze and bust things up. 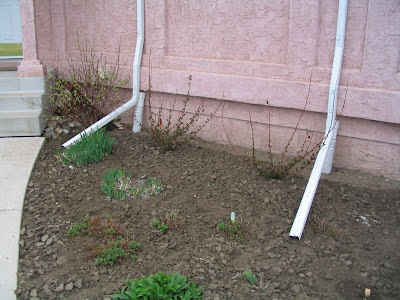 Taking a closer look, you can see a black tube that comes up from below ground near our front step.  This is just a section of non-perforated weeping tile that is teed below every downspout.  The middle part of the tee connects to a flexible piece of downspout extender. 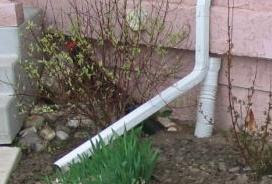 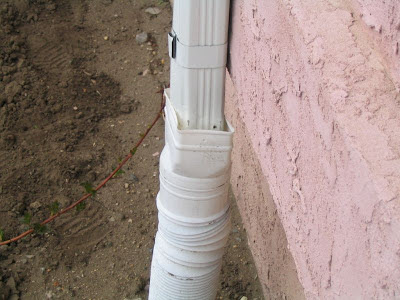 The weeping tile carries the water from all the downspouts to the top of the "dry" stream bed.  Gravity takes over and the water flows down into the sump basin.  The sump pump cuts in when enough water has been collected and pumps it back up the slope via a hose hidden under the stream bed's rubber liner to a holding tank.

Now up top, I mentioned how water is a precious resource out here.  But since I got this baby together, we've gotten our house connected up to "city water" and so we no longer depend on the well.  I also since finished another mega-project to bring water up from the river 85' feet below to water our trees and garden (a topic for a future blog post, perhaps).  Finally, it  seems that every cloud that passes over the house lately brings with it an inch of rain.

Water is still precious, just maybe not quite so precious as it used to be.
Posted by DeKay at 7:56 PM