I have always been a skinny guy.  I have the genes of Phasmatodea
As the years went by and I grew older, so did everyone else.  Maturity does pretty much everyone some good, and I wasn't picked on anymore.  I went about my business as so many other skinny guys do: I jogged, put rocks in my pockets when the wind came up, and avoided all you can eat buffets.

Enter university, and my hair started thinning out.  The new round of jokes made at my expense were sometimes funny, sometimes not.  It didn't help that there wasn't much I could do about it.  It was also depressing in that thinning hair and a skinny frame did not make for the most attractive combination.  I came to believe that I would die a lonely death.

But as a friend of mine would say, "I'd rather be lucky than good".  I met someone wonderful who would later become My Lovely Wife.  She said that my thinning hair and skinny frame did not bother her.  Maybe.  Hopefully.  But it bothered me.  Each of these things had been a noose around my neck for too long, and I decided I would cut each of them away.

I would embrace the thinning hair.  I would shave my head and go from male pattern baldness to Lex Luthor cool in one go.  Easy.
But not so fast.  There was one problem: the combination of a bald head with my skinny frame would have me regularly mistaken as a cancer patient.  And that isn't cool at all.  I would have to put on some weight, but all of my years of being too thin made me fat-phobic.  If I was going to put on some weight, it would have to be good weight.  I started working out.  Not easy.

And I made mistakes, many of them.  My biggest mistake was believing what all of the workout gurus on the Internet were saying: you need to do endless amounts of crunches to get good abs, you need to hit the muscles from all angles to get them to grow, you better eat every few hours or your muscles will fall off, and you need to buy tons of supplements to get anywhere.  I would learn later that all of this is wrong.  All of it.  But I'll get back to this in a bit.

When I started working out, I bought a simple weight bench and a set of "standard" weights that you see collecting dust in so many basements.  I did endless amounts of curls with these things, along with other assorted bits of randomness.  And then one day I started to notice that my arms were getting a little bigger.  Not a lot, mind you, but enough to give me the positive reinforcement I needed to keep going.    When you've been skinny all your life, this is a big deal.

I began doing some research as I kept exercising, and my understanding of what is effective and what isn't as it came to exercise and nutrition gradually improved.  I learned that to get strong, you need to lift heavy things.  It sounds crazy, but it is true.  I decided that I would get myself an Olympic style bar and set of weights totaling 300lbs.  300 lbs!  I'd never need to buy more weight again!  But one solution leads to another problem, and the idea of pinning myself under a heavy barbell, only to be found dead two weeks later was not a good one.  So I bought myself a power rack.  I could then lift heavy weights safely in my own basement.  I was still making mistakes, but I was on the right track and continuing to gain strength. 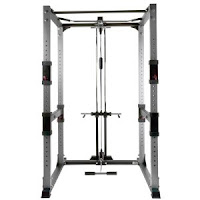 At least I did one thing right.  I ate a ton of food.  Even though the workouts I was doing were far from optimal, my undersized and undernourished body soaked up calories like a sponge.  I was gaining a pound a week, and most of that was good weight (i.e. muscle).  I hit the scale every Monday and watched with glee as my "newbie gains" took hold and the dial on the scale inched upward.

My research led to to a couple of sites that I became very grateful for.  They actually had some science behind what they had to say.  This was a refreshing change from the "bro-speak" that is pervasive on the web.  If you've ever heard someone say something along the lines of "Everybody knows that you need to do X to get Y", you've got yourself a perfect example of bro-speak.  "Everybody knows that you need to eat breakfast to kick-start your metabolism in the morning".  "Everybody knows that you need to eat brown rice and chicken breasts if you want to get lean."  Etc.  Bro-speak is a good example of correlation vs. causation, and it is important to know the difference.  Sure, there are a lot of bodybuilders that eat endless amounts of brown rice and chicken breasts and get very lean doing so.  But just because they did so doesn't necessarily mean that that was the cause of their getting lean, and that they couldn't have gotten lean by eating some other way.  Consider this: ice cream sales go up in summertime.  Drownings go up in summertime.  This must mean that ice cream causes drowning, right?  Of course not.  Ice cream sales correlate to drownings (they follow the same kind of trend), but one doesn't cause the other.

Back to those sites.  The first site was Lyle McDonald's Bodyrecomposition.com.  I'd recommend that everyone read his site from top to bottom to really understand how the nutritional processes work in your body.  The sooner you understand how you get fat, that a calorie is a calorie, and that your weight depends simply on calories in vs. calories out, the better off you'll be.

The second of those sites was Leangains.com.
This is Martin Berkhan, the man behind Leangains.  A man who doesn't use steroids.  A man who walks around all day everyday at around 6% bodyfat.  And a man who once figured out he ate on average of an ounce of cheesecake every day for a year.  Martin developed a version of Intermittent Fasting (IF) where you restrict your calorie intake to within an eight hour window and fast the other sixteen.  He uses some pretty solid research to put a knife through the heart of many myths related to exercise and nutrition.  This is another site you need to read from top to bottom. You'll learn that your metabolism doesn't slow down if you don't eat every few hours, how partitioning calories around a workout can benefit getting stronger, and that "clean eating" is not a requirement to getting big and lean.  And he's got the clients to prove it.

A lot of what he wrote made good sense to me and I was thinking I'd give it a a shot.  The one thing that held me back was that I thought (like so many other people) that I would starve to death if I didn't have breakfast.  But then again, how do you know if you don't try?

How do you know if you don't try?

How many times have we shot ourselves down when we might have been easily capable of doing something?  And I'm not talking about jumping off a bridge here. I was talking about skipping breakfast.  If I didn't like the experiment, no harm done.

I remember the first day I gave this a shot.  I stopped eating at 10:00 pm on a Friday night and didn't eat until 2pm the next day.  My expectations were that I'd feel crappy, tired, and hungry until I ate that day.  I was amazed that it actually went the other way.  The coffee I was drinking (caffeine helps to curb appetite) was like rocket fuel on my empty stomach.  I was full of energy.  And I also experienced another benefit to the fast that I had read aboout but thought was bullshit: my concentration levels were way up.

That night, I put a major hurt on an all you can eat buffet.  And this highlights another benefit of Intermittent Fasting: when you eat, you eat big.  The same amount of food eaten in a narrower window seems like more and leaves you satisfied.  If you've ever done the "eat every three hour thing" and always felt hungry, then give IF a try.

I've been eating this way now for the last two or three years and don't think I'll ever go back.  Eating big rocks.  I will often eat 1500 calories within around 90 minutes after my evening workout and then go to sleep for the night (for point of reference, a Burger King Whopper has 670 calories).  I don't get fat thanks to calories in vs. calories out.  Simple.
But the bigger benefit to me has been how my ability to concentrate has increased.  This is something I noticed was degrading as I grew older.  I think my focus is now at least as good as it ever was.

Am I a big and lean like Martin?  Nope.  Not even close.  I could very likely eat more and train smarter, and my age and crappy genetics in this regard don't help.  But I am decently strong for my size and have around 20-25 lbs more muscle on me than when I started.  Years ago I was picked on.  Now friends and family will say to me out of the blue that I look really good.  That feels great, because I've worked damn hard to put those pounds on.  That positive reinforcement gives me the extra push I need when I'd otherwise feel too tired or lazy to go downstairs and hit the iron for the night.

Anyhoo, if you made it this far, you might be wondering if I have any point to make in all of this rambling.  I do, but that will have to wait to Part II.
Posted by DeKay at 12:01 AM

Email ThisBlogThis!Share to TwitterShare to FacebookShare to Pinterest
Labels: Motivation, Working Out